How We Got To The Beach / How We Became Tourists 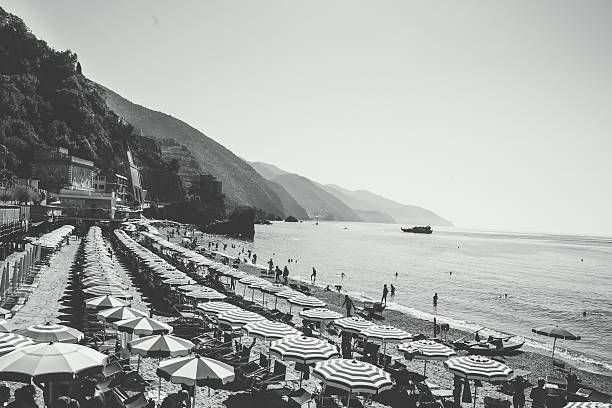 Tourists arrived at the beach in the same way their ancestors arrived in new worlds. The history of the beach vacation is intimately tied to the exile and immigration of British and European peoples. While we dance and drink and rest and relax on the shores of foreign places around the world, how we got there holds in it the key to understanding who we are as tourists. It whispers that we carry the baggage of city life and work with us, and that hidden under layers of generations folded like old clothing and sealed away in luggage lies ancestral exile. Below the sand and surf, this is what we find waiting for us at the beach.

The Enlightenment era of the eighteenth century created the conditions and trajectories for individualistic travel, mostly among the European elite. No longer reserved for religious pilgrimage, tourism became secular and educational, coming to exist for the individual. This is the era of the Grand Tours, from which our modern Eurotrip derives.

In the nineteenth century, political peace between nations alongside loosened international borders and newly-inaugurated rail transit opened the door to cheap and mass travel. Tourism was no longer reserved for elite exclusivity, but now for the working classes as well. During that intense century of exile and holiday-making,

“places by the sea emerged all over the world, modelling themselves on these early mass resorts but developing many new features and characteristics to gaze upon...”i - John Urry

From Farm to Factory

The Industrial Revolution in England was both cause and consequence of mass migrations. Countless people fled persecution and flocked to the cities. The coastal town as a beach vacation destination became franchised. The sun-and-sand getaway slowly followed workers in each newly industrialized region. Seaside towns and their shores became exoticized places where northern drudgery could find solace in their healing waters, much like they do today.

The Enlightenment produced romanticism, a kind of artistic and mythopoetic revolution in cultural perception. Through art, travel, literature, and photography, it placed an “emphasis on emotion and individualism as well as glorification of the past and nature.” In the context of travel, this meant seeing nature as separate from the human world. The mountains and rivers and plants and animals previously at the heart of the local world, that is, before peasants were exiled to the cities, became objectified spectacles to gaze at, to experience, and to conquer.

Romanticism became a way for European peoples to view, at a distance, the rupture of having lost the village to the city. The industrial revolution emerged because of the combination of laws that privatized land, the landlords that forcibly exiled local peasants from that land, and the new industrial towns that required cheap labour. Together, these factors ensured that peasants became workers, the farm became a factory, and everything ancestral was either lost or commodified. This is how we got to the beach. This is how we became tourists.

The Sea and Sanity

Collective schisms or exoduses of this sort are better understood as traumas. In the case of the industrial revolution, those traumas were subsumed into the glory of the vacation. As the late author and sociologist John Urry explained, “romanticism not only led to the development of 'scenic tourism' and appreciation for magnificent stretches of the coastline. It also encouraged sea bathing.”

What was left behind in the village and on its peripheries was transformed into an industry, in which newly-minted workers could pay to visit, see, and experience what was lost. However, tourists were never seeing the lost thing itself, only a version of it to which they would have no enduring relationship. The mountain, like the carnival, like the beach, became a simulation, a fleeting taste of liminal revelry and old-time kinship. This hasn’t changed. Today, we just lack the memory to recognize it as such.

Much of nineteenth-century tourism involved witnessing the ocean in its mythic and natural glory. It also offered what many saw as its presumed health-giving benefits. The beneficial aspects of the ocean are well-traded understandings among those who tour, especially in our time. Sun is beneficial, just not too much, while swimming is, to a large degree, healthy. However, ocean swimming in England at the time wasn't viewed as pleasurable, but medicinal. It was undertaken in order to cleanse and purify.

England’s seaside resorts inherited their value from the growing popularity of spas (and the curative nature of their waters). In these places – Scarborough, Blackpool, Southport, and Brighton among others, workers, now suddenly also tourists, arrived en masse for a day, a weekend, or longer to take in the medicinal nature of the ocean. Such self-improvement was not just therapeutic for the new, urban individual, but could be described as class envy, overcome. Workers finally had their tickets, joining the elite at the beach.

The English inherited the Roman history of seaside “tourism,” alongside the Roman understanding of the sea and its waters as curative. However, English tourists didn’t swim in them. That is because most people at the time couldn’t swim. Swimming as a pastime didn’t become popular in England until the 1860s. Even before the advent of working-class mass tourism, English beach-goers were accompanied into the sea by a “bathing machine” and “dipper.”

People did not swim, but instead “bathed” or “dipped.” The “dipper,” in charge of the bathing machine, assisted in keeping the person or patient afloat, tending to the manner of the sea, and to a plethora of disorders waiting to be cured. What English worker-tourists encountered during these medicinal vacations was as a kind of humanist-technological baptism, anointed by a local “dipper,” one of whom the Morning Herald newspaper in Brighton referred to as the “Venerable Priestess of the Bath.” The Romans were, once again, almost two centuries later, at the shores.

It was here in Brighton where a slow shift occurred. Whereas for almost two centuries the beach was seen as a place to heal, largely for the upper classes, Brighton eventually devoted itself to pleasure-seekers of the middle and working-class variety. While the restorative qualities of spa-like industries remained, beaches slowly became the occasion for which to escape the city. Backed by industry, the beach became the place to discard the stress of the city.

For the first time in England, the beach was uniquely and specifically a place where workers not only purposefully left behind their jobs and the city, but the monotony and drudgery of everyday life. They became liminal spaces, thresholds for the communal festivities and play that previously existed in the village, but not in the city. Moreover, their liminality gave way to change.

Brighton, for example, was the first place where different social classes mixed publicly, even inverting their roles. It became known as a place where sexual excess and pleasure were common, a kind of inauguration of the modern English carnival. Eventually, Brighton became the precursor for the American 'spring break,' glorifying the vacation in order to conceal the poverty. However, if you have any idea of what Spring Break is today, you know that poverty to be on full display.

Does this sound familiar? This was, for many years, a reason why I jumped ship, backpacking through foreign lands. Perhaps this desire for escape, rest, and revelry is recognizable to you, almost two centuries later. Perhaps, such reasons for vacating, even temporarily, are yours, as well.

For a long time, I was confounded by why tourists are so attracted to the beach, the shoreline, and the threshold of the most distinctly grandiose worlds we might inhabit. People flock to the shore, almost religiously, as they have for the last two centuries. We must ask what it is we are searching for on the shores of places and peoples not our own.

While sunbathing generally appears as superficial, from tilted vision it appears devotional – masses splayed out under one life-giving celestial body and submerging themselves, however briefly, in the magnetic and liquid consequence of another. For a moment, like our aquatic forefathers and mothers, we immerse ourselves in their world – the world of humanity’s biological ancestors.

Likewise, for many cultures, past and present, the underwater realm is understood as an underworld, a no man’s land, and for some, the home of the dead. At the beach, then, we might ask what exactly it is we are worshipping there, and if, perhaps, that ritual doesn’t resemble something much, much older.

If our time at the beach is primarily understood as rest and relaxation, if it is a way of escaping the urban suffering that accompanies our days, then we are clearly the descendants of those who fled the factory for the beach some two hundred years ago.

Memory, in the Place of Amnesia

Somewhere in there, on the shores of our amnesia, is how we might come to remember, renew and repair the threads that tie us to worlds not solely human, but that might teach us what it means and what it meant to be human for our ancestors. We arrived at the beach as tourists in the same way that our ancestors arrived at ports heading off to new worlds - via exile. Having lost most of what informed and fed our days as people rooted to place and its wild peripheries - the more than human worlds, we have become strangers, tourists, creating surrogates for every last thing that hitched us to what, today, we call natural and ancestral.

Perhaps, it is in the nature of things that this is how we proceed, pining unaware for a way of being with the world that doesn’t proceed at the expense of it. However, when the latter exceeds the former, tourism is what is leftover, at least in our time. It is our way of contending with what was lost, what was left behind, but without the memory of such things, we deepen the exile we might otherwise attempt to undermine. We ensure that the only devotion to be seen on the beach is to our amnesia, to our lostness.