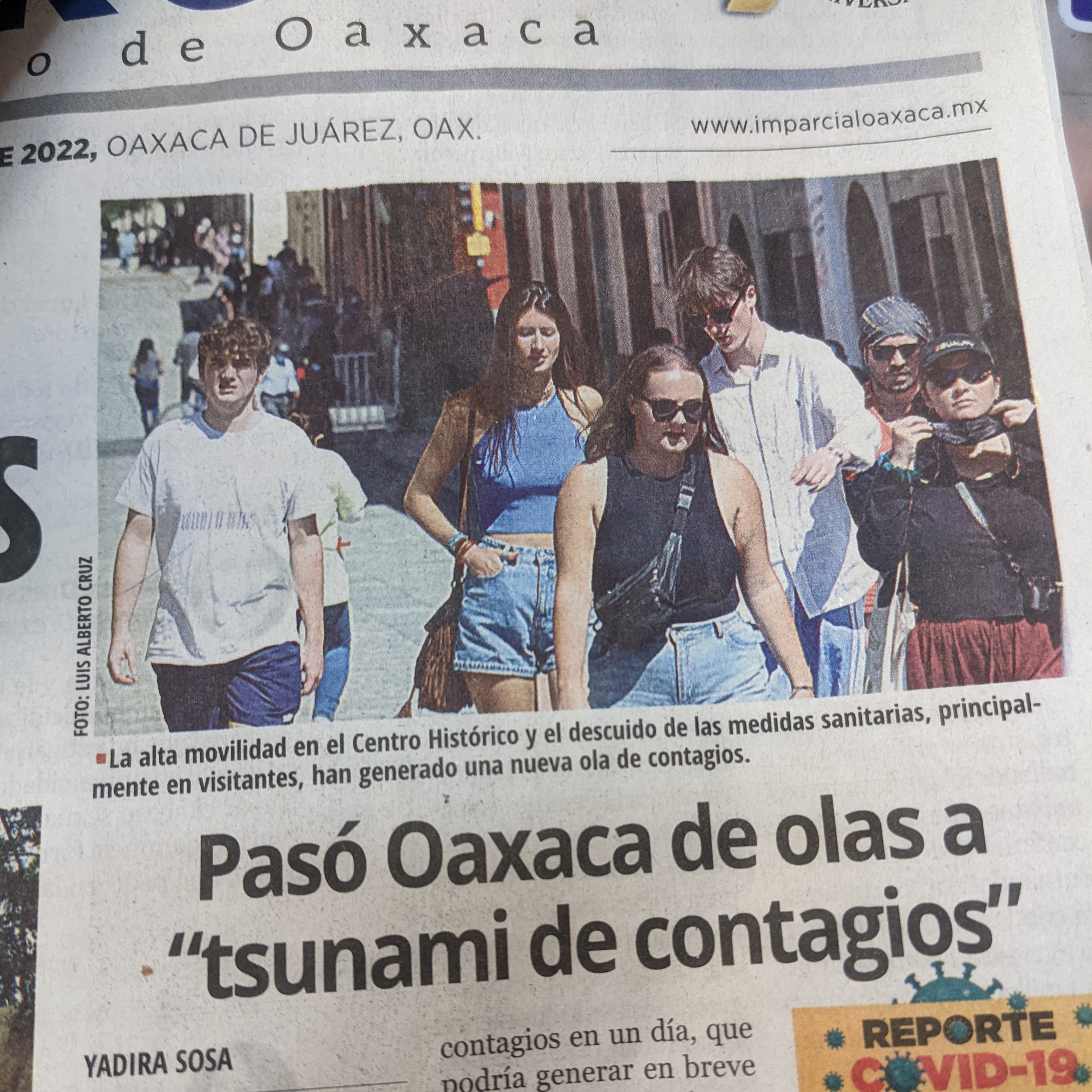 In these times, seeing travel as freedom is an escape that blinds from what is being asked of us.

"Wear a fucking mask, gringo" ... were the words printed on a sticker that made the rounds in the historic (tourist) centre of Oaxaca City, in the last year. There were others, as well, going on in Spanish about freedom, clearly written by an Anglophone. No surprise there. It’s unclear whether the pro-mask sticker, which was written in English, was written by a Oaxacan or not. Maybe in the malaise of my mind, the consideration comes as an afterthought. You know what I mean. Everyone’s exhausted and more or less over IT.

But this was about a year ago and I’ve put off writing about it until now, in part, because the reason the stickers were put up in the first place persists, in almost the same way that a global pandemic persists. You see, Oaxaca is a tourist town, and when borders closed worldwide, Mexico was one of the refuseniks. With an adequate passport, anyone could come and go.

Businesses reopened slowly in September 2020 and while the second and third waves hit over the fall, winter, and spring of 2021, while most countries closed up shop as soon as they had reopened, Mexico remained a disease destination. It was more clearly lit in the crosshairs of foreigners than it ever had been previously (see The Return of Tourism: Away).

And so, the escapees of the Global North descended onto the beaches and colonial towns and metropolis’ of Mexico. They came in droves and the invasion has only gotten progressively worse since then. Walking the streets in the fall of 2020, it was obvious who was a local and who wasn’t, despite the differences in skin colour that often accompany such categories. When we went back to “normal” here, the locals walked the streets, almost all of them, with masks on.

Despite Oaxaca being known as a centre for political resistance, everyone masked up. We might instead wonder if this was, in fact, their political resistance. While it’s hard to gauge, the ancestral memory of uncontrollable and deadly viruses arriving on these shoes might not be as old as the number of years and centuries that history books impart on us. Time exists differently in different places and for some, history is not as old or gone as others think it is. And so people here proceeded accordingly, with the understanding that their movements carried with them the real possibility of being of deep consequence to their neighbours (in part, because they still looked upon each other as such, and not as strangers or passersby).

The city was open and yes, there were restrictions, but for the most part, it felt like people were ready to get on with their lives. Walking down the street, though, it became glaringly obvious when, and more importantly how tourism returned. It wasn’t just the hawkers on the sidewalks or the double-decker, sightseeing tour buses making their endless rounds, but it was the tourists themselves. You could point them out a mile away, regardless of their skin colour, because they were the only ones not wearing masks.

Now, if this was a purely ideological debate, there would undoubtedly be local people here who would take up sides. But just because local people didn’t want to wear a mask doesn’t mean they didn’t. For a time, anyway, there were no restrictions on doing so (hence the tourists). And yet, people still wore them, mostly out of solidarity for each other, not obedience to the state. The tourists, on the other hand, were a different story.

It was somewhat unfathomable to consider that foreign people arriving in a tourist destination, seeing everyone else wearing masks, probably knowing that Mexico had absurd rates of infection and mortality, proceeded as if their “right” to a vacation and their “right” to infect (and be infected) trumped the health and well-being of the very people who hosted them. This has to be the epitome of tourist entitlement in our time. Entitlement and complete disregard for the lives of others.

In Case You Were Wondering...

(If you need proof, just look to the rates of COVID-19 infection in Oaxaca state running back all the way to March 2020. Everything looks pretty much“stable” until around July 2021, the time by which northern,western tourists would’ve had access to the full vaccine rollout in their respective countries. This was also the beginning of summer vacation for such people. Get jabbed and start flying. Now,correlation does not equal causation, but it does raise eyebrows. The most recent spike, which far outweighs that of previous “waves”arrives in this month, January 2022, following the inevitable meeting of families and friends for the Christmas and New Year holidays. It also coincides with the typical snowbird schedule of flying south for the winter. This includes the masses of Mexicans that travel to Oaxaca as a destination for the holidays. Again, there’s no causation implied, but it merits questioning our consequence.)

Forget for a second the deafening tone of politics and viral mis/information that pervades the airwaves. Forget about the statistics. Forget your fucking opinion for a second. That too is entitlement. Consider that in the context of what I’m speaking to right now, we are in the realm of hospitality. Not rights, not opinions. Hospitality.

Entitlement to the Nth

Recently, an old friend of mine had travelled to Mexico after, I imagine, two years of relative isolation and lockdowns in Canada. This person showed up in a well-known tourist town and set out to document the ensuing parties there, in which no one was wearing a mask, in which nobody needed a vaccine (or proof of one) to enter. The video portrayed the childlike triumph and glory of having escaped their parent’s grounding. Look at me! Look what I can do! Look at my freedom! The most ironic thing is that this person, who fought so hard against the extreme lockdown measures of the government back home had abandoned what they considered the real work for a party thousands of kilometres away. Freedom suddenly looks a lot like abandonment.

This person isn’t alone. Recently a video of a group of Canadian social media influencers who chartered a flight to Mexico went viral because they were dancing and partying in the aisles, while the flight attendants looked on nervously, mostly helpless and probably extremely anxious. The airline decided to cancel the return flight, leaving the influencers stranded. The story goes that the castaways all got COVID in Mexico, and since the Canadian government requires a negative PCR test for arrival into the country, they would’ve had to wait out their illness in paradise. What a shame.

But I digress. This isn’t about ideology, or at least it’s about ideology in the way that it blinds people from imagining the world in any other way. This is about hospitality. This is about what it means to be a guest in another country, in front of people who are, one way or another, responsible for you. It is about how we walk into other people’s homes and conduct ourselves, or don’t. And this is the problem: the guest has become nothing more than a tourist, a fucking dilettante because there is often zero sense of personal responsibility for what happens to the people and place that hosts them. Tourists know this. This is what tourism is.

Inevitably, tourists leave and the locals have to clean up their mess. But how do you clean up someone’s invisible trash? Is there a disease dumpster into which the locals just throw your viral loads? Well, of course not, unless the tourism boards and workers and tourists themselves haven’t already decided that the landfill is the local world and people. This might sound caustic, but this is nothing new. We’ve only come to this point because of the virulent unwillingness to consider how bad things could’ve become. And here they are, not as bad as they could be, but gambling on how bad they might get without considering how close and how inevitable bad actually is.

No amount of PCR prevention or vaccine counts can change the fact that the escapism and entitlement of the day simply bring us back to a pre-pandemic predicament. Are we neighbours or are we tourists? Are we people of consequence or people on the take? One way or another, the modernist mindset will have to reach full eclipse before we can find out.

Being Hospitable, Being a Citizen, Being a Guest

So, what does it mean to be a guest in another person’s home? What does it mean to be a citizen of your place and time? These questions are one and the same. The answer arrives when we understand how - how to inhabit the role of guest and citizen. So, if you go to a place and everyone is wearing masks, then don’t look act like a fucking tool. As much as I don’t want to wear a mask, I do it anyway, because, at the end of the day, Oaxacan people are going to look at me and assume I don’t live here. They’re going to assume that I’m a tourist, based on the fact that I don’t look like them. And so whatever reaction they have to someone who is here for a week, valiendo verga about the place, feeling entitled to their “rights” and never their responsibility, they are going to see me, their neighbour, as they would (and increasingly do) a tourist.

In times such as our own, when guest hospitality is nowhere to be found, hosts will almost always become hostile as a result. That hostility will be turned onto foreigners as a whole, regardless of skin colour, privilege or time-in in that place. This is the unconsidered disease that tourists, local governments and the tourism industry leave in their wake. For the locals, there is no difference in their eyes between someone who has lived here trying to honour their place as a guest for a decade and the amateur who flies in and out for a week to get wasted and buy souvenirs. This is what happens, this is what is happening, and without a way to firmly plant ourselves in the consequence of our lives far beyond our ability to see it, local indifference will turn into hatred, and every last thing you considered hospitable about a place will suffer as a result.

The Ugly American was the fucking patron saint of intercultural possibility compared to this shit. Now, the devil is in the details, which are mostly a willingness to not want to be where one is, to not want to be when one is. Today, ugliness is is naked, just like the emperor, unabashedly ignorant of his place in the world.

So, fuck your ideology, fuck your entitlement because all it does is breed blindness, both in the eyes of the tourist and the locals. If we can’t see how our wake washes up on the shores of a place long after our departure, then consider your home, the one you're so apt to escape. Submerge yourself in that wake and start working backwards, from whence it came. Do the exponential math and maybe, just maybe, we can start to see how the guest became a tourist, how the neighbour became a stranger, and how we might use that water to flush out a world on fire.

There is an old saying in Mexico that says “where you go, do what you see.” This is so simple and yet such a stranger to the times wherein people actively estrange themselves from each other and the world, often in the name of having an opinion. So, you want to be a tourist? Stay the fuck home. You want to be a guest, then wear a fucking mask, gringo.